9/5 race favorite Melatonin won his second stakes race of the season as he claimed Saturday’s $500,000 Gold Cup at Santa Anita, punching his ticket to the Breeders’ Cup® Classic while doing so.

As part of the ‘Win and You’re In’ program, Melatonin, ridden by Joe Talamo, won his second major race of the season and booked a spot in November 5’s Classic.

With the win, Melatonin’s stock continues to rise rapidly, and belongs in the discussion with California Chrome et al in horse racing’s showpiece event.

“One in a Million”

This year, Melatonin has won 3 of 4 starts. The win in the Gold Cup at Santa Anita pushed Melatonin passed $1 million in career earnings, to $1,218,552 for owner Susan Osborne. “It’s a dream,” Osborne said in the winner’s circle. She described the winner as “one in a million.”

Trainer David Hofmans could not contain his excitement with the victory. “I think it might be his best race,” Hofmans said. Melatonin reeled in pacemaker Lieutenant Colonel coming into the home stretch before pulling away from 25/1 shot Win the Space to win by a half-length.

“Some people thought he was one-dimensional and needed the lead, but he’s not,” Talamo said. “He’s a jockey’s dream. He can go to the front or sit second or third.” Melatonin was timed in 1:59.79. 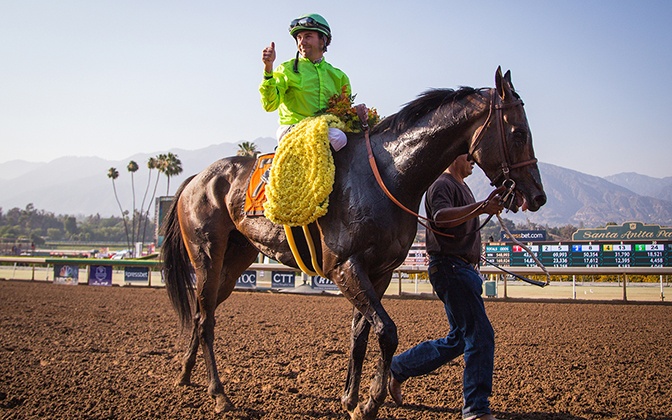 Melatonin has been the leading light for trainer David Hofmans stable this year. Winner of the 1996 Breeders’ Cup Classic with Alphabet Soup, Hofmans expects more improvement from Melatonin in bigger races down the line. "Those were good horses,” Hofmans said of the Gold Cup field. “What he’s got to face in the future are Grade 1-plus horses.”

Get Your Breeders’ Cup® Package Today!

Don’t miss your chance to witness The Breeders’ Cup World Championships® from November 4 – 5. Feel the thrill of victory when the grand spectacle of the ultimate showcasing of Thoroughbred racing hits the highest level of international competition.

Make sure you don’t miss your chance to witness this showpiece event by getting one of our ticket packages!  Our unique packages include private secure entrances, access to exclusive in-track hospitality party venues on race days, celebrity meet-and-greets, and more.