The Breeders’ Cup "Win and You're In" Challenge Series continued last Saturday with the Awesome Again Stakes, as Smooth Roller beat out 2014 Breeders’ Cup Classic winner Bayern. Bayern, who entered the race at 5-1 odds, took the early lead but couldn’t keep it in the stretch.

Jockey Tyler Baze kept Smooth Roller behind pace-setting Bayern before he took charge on the far turn and cruised to the front. The four-year-old gelding went the 1 1/8 miles in 1:48.08 to win his first Grade I race in this graded stakes debut. Hopportunity finished second followed by Bayern in third.

“This is his fourth race and from the very beginning Victor told me he could really run and he proved it. I worked him last week and ever since I’ve been on him down at Del Mar he’s turned into a monster work horse in the morning; he really wants to do it. Last week, Victor wasn’t here, he was at the Keeneland Sale. He called and told me to go seven eighths in 1:28. I literally breezed him in 1:25. I called him and told him ‘that’s as easy as he wants to go and he did it the right way.’” 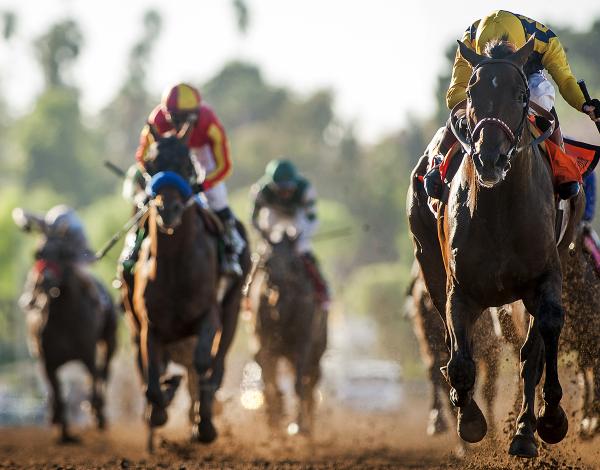 Trainer Victor Garcia had a few words to say about the race as well.

“I expected him to run big. He had a lot of trouble in his last race. He was washed out, stumbled from the gate, was four or five wide both turns and only got beat a length and one-quarter. I worked the horse twice and he worked real good. Tyler was real happy with it. We’ll go to the Breeders’ Cup (Classic), absolutely.”

Smooth Roller’s win in the Awesome Again Stakes earns him an automatic spot in the 2015 Breeders’ Cup Classic where he will join American Pharoah, Beholder, Hard Aces and Honor Code. Noble Bird, who won the Stephen Foster Handicap, is out of training due to injury and will not be competing in this year’s Breeders’ Cup.

Watch the recap below!

We already know Hard Aces, American Pharoah, Honor Code, Beholder and now Smooth Roller have earned automatic spots in the 2015 Breeders’ Cup Classic. Who else will join alongside?