American Pharoah had nothing to prove on Sunday as he raced in front of a crowd of 60,983 at the third Breeders’ Cup Classic Challenge Series race. The Triple Crown™ winner dominated the Haskell Invitational and recorded a 2 ¼ length victory over Keen Ice. As if being the 12th horse to win the Triple Crown™ wasn’t enough, American Pharoah zoomed past competitors in the Haskell in 1:47.4.

There’s no denying that what this horse does is simply breathtaking. Have you ever seen a horse with such precision, talent and endurance? He makes everything look effortless.

After winning the Triple Crown™, American Pharoah’s return was highly anticipated, and he certainly didn’t disappoint. This 10-1 favorite broke well from the No. 4 spot, but he didn’t instantly take the lead. Espinoza kept American Pharoah in second as Competitive Edge stood out in front. But once he reached the far turn, American Pharoah took command and came out on top once again. 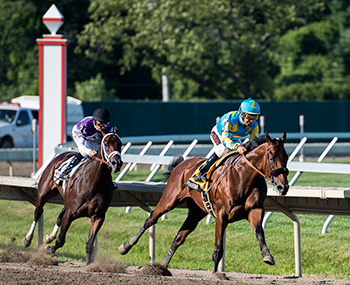 This eighth straight victory for American Pharoah earns him an automatic spot in the Breeders’ Cup Classic this October. Until then, the Triple Crown winner has several options for his next race including the Travers Stakes at Saratoga or the Pennsylvania Derby at Parx. Guess we will just have to wait and see where he goes next!

Watch the Haskell Invitational below!

American Pharoah will join Hard Aces and Noble Bird in the Breeders’ Cup Classic this October, and we know you don’t want to miss it!