The Rules of Naming a Race Horse

While many believe that naming a race horse is as simple as coming up with a creative name, it’s much more than that. There are a variety of rules and regulation in place by the Jockey Club when it comes to creating names. Although the horse might have been given a stable name at birth (for example, Secretariat was called Big Red), when the horse is bred or is raced, it goes by its racing name.

So what are these rules and regulations? Who decides them? How are the horses classified? When does this happen?

Read on to learn how a race horse is named, and the rules and regulations in place for name submission.

Okay, so you’re probably thinking “what in the world does age have to do with naming a horse,” but the answer is quite a lot, actually. Regardless of when a horse is born, all horses are given the birthday of Jan. 1. This is to keep horses in easily defined age groups.

Within one year of their actual date of birth, horses much be registered with the Jockey Club, and this is no easy task. The horse must be DNA typed to prove their lineage, and both parents must be registered and DNA/blood typed. In addition, the foal cannot be born through artificial insemination or embryo transfer.

Once the horse is registered in its first year, it must be named by Feb. of its two-year-old year. This is where things get complicated.

When owners go to submit a racing name, they can submit up to six names to the Jockey Club and the board will decide which name they can have. If the horse has not yet been raced or bred, the owner can pay a fee for a new name provided they dislike the one selected by the Jockey Club.

Horse names can be up to 18 characters in length including all spaces and punctuation, and also must follow the below guidelines: 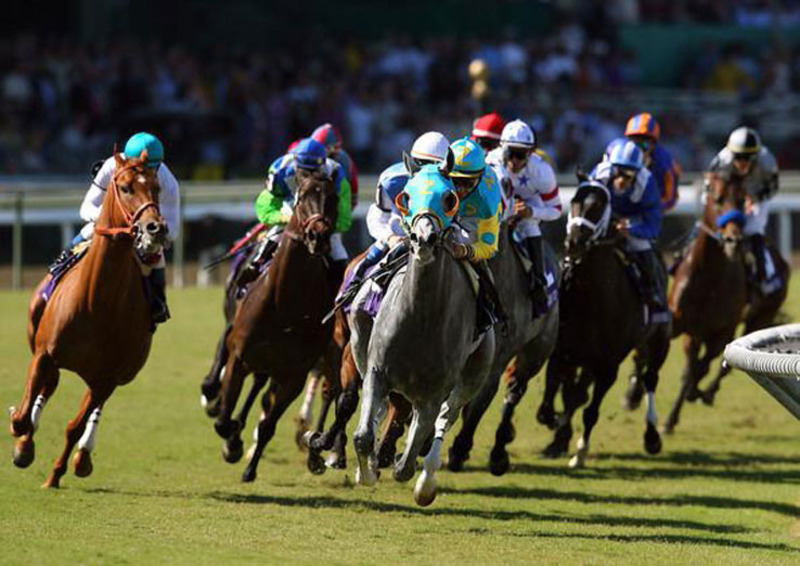 Oh yes, lots of rules! However, some owners are able to get around certain rules by using creative spelling.

And as you can imagine, coming up with six possible names according to all of these regulations can be difficult, and if the owner cannot come up with a fitting selection or all of his choices are disapproved, the Jockey Club will select a name on its own accord.

Finally, once the horse is awarded its name, its registered name is tattooed under its upper lip for identification purposes. This provides a permanent link for finding the horse’s registration information.

Now That You Know How Race Horses are Named, Cheer on Your Favorites at the 2014 Breeders’ Cup!

The fields of contenders have not yet been announced for the races, but the Breeders’ Cup won’t be without unique and creative race horse names. This is your chance to get invested in a horse and cheer them to victory LIVE!

With Official Ticket Packages offering seats with some of the best views of the track to both race days, exclusive access to an in-track hospitality venue complete with open beer, wine and soft drink selections and complimentary gourmet food, and a plethora of other VIP amenities, this is one racing weekend you don’t want to miss!

Get more information today on how you can attend the 2014 Breeders’ Cup World Championships by visiting QuintEvents website or by calling 1-866-834-8663 to speak to a representative.

Join the conversation on social media using the hashtags #BC14 and #BCVIP!