The four-year-old Tonalist raced with ease and gained a victory at the Gold Cup for the second year in a row.

Jockey John Velasquez settled Tonalist near the rear of the six-horse field while Constitution, closely followed by Wicked Strong, set the pace through the first six furlongs. Wicked Strong assumed the lead, but upon entering the stretch, Tonalist exploded and finished 4 ¾ lengths ahead. The Tapit colt covered the
1 1/4 miles in 2:02.16.

"I'm delighted for Mr. Evans," trainer Christophe Clement said. "Obviously, he believed in us all along. And mostly I'm delighted for the horse; I've never lost my faith in the horse. I never thought he was disappointing, he was a bit unlucky for the year, but the way he won today was very impressive. 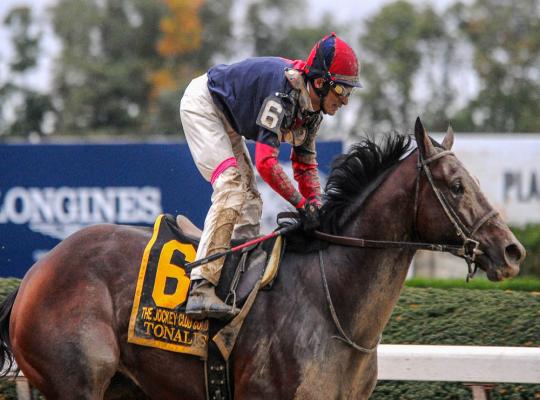 "I was very happy with the way he was traveling. He always looked very comfortable. I thought that at any stage of the race, he could've taken them on. He's back to what I always believed. He's a top-class horse."

Tonalist joins an impressive group of automatic entries into the Breeders’ Cup Classic: American Pharoah, Beholder, Hard Aces, Smooth Roller and Honor Code. Noble Bird, who won the Stephen Foster Handicap, is out of training due to injury and will not be competing in this year’s Breeders’ Cup.

Watch the recap of the Jockey Club Gold Cup below!

There is a total of seven challenge races for the Breeders’ Cup Classic, the last of which was the Jockey Club Gold Cup. The series for the Classic has now wrapped up; seven horses gained an automatic entry, although one will not be competing.

With Tonalist’s victory, we now have six horses aiming for the 2015 Breeders’ Cup Classic! With the competition so high, it’s definitely one event horse-racing fans are dying to attend. Limited tickets remain so you need to act fast!

Here's what you have to look forward to at the World Championships!