Good news! We can all sit back and breathe easy! We’ve been anxiously awaiting the decision surrounding
Triple Crown™ winner American Pharoah and his retirement, and it looks like we finally have our answer.

Thursday morning, Owner Ahmed Zayat announced that he will keep American Pharoah in training despite his unfortunate second-place finish last Saturday in the Travers Stakes at Saratoga.

"I have discussed all aspects of American Pharoah's race last Saturday in the Travers — and his condition since the race — with our whole team, and have decided American Pharoah deserves another chance, so we are pointing to the Breeders' Cup Classic," Zayat told ESPN.com and the Daily Racing Form.

Originally, Zayat’s “gut feeling” told him to retire the 3-year-old superstar because it appeared he was tailing off. However, after conversing with those affiliated with the colt, he decided that American Pharoah deserves “redemption.”

"I am very confident in my decision," Zayat said. "Not a moment has gone by since the race on Saturday when I have not thought about this decision. My initial concern right after the race was about American Pharoah's condition, because he did not run his 'A' race. He has come out of the race in great shape. And after examining all the evidence and talking it over with our team —Bob Baffert, my son Justin, Jimmy Barnes, and Victor Espinoza ­— I believe there were a combination of factors that prevented American Pharoah from running his absolute best on Saturday. I have every confidence that he can run to his best again, and he deserves the chance to do so." 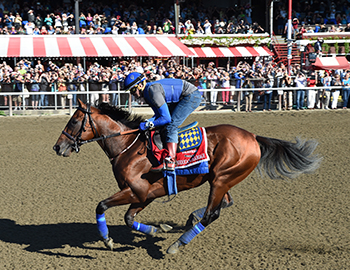 With American Pharoah in the mix for the Breeders’ Cup Classic, along with other standout horses such as Beholder, horse racing fans are going crazy. We would love to see American Pharoah go for horse racing’s "Grand Slam." Talk about an awesome way to finish a career!

"I am very confident that this is the right decision for American Pharoah," Zayat said. "He loves to race. He has provided my family, racing fans and general sports fans with great thrills this year. He won the
Triple Crown™ earlier this year, and he deserves the chance to be in the sport's premier year-end event."

At the end of his career, American Pharoah will retire at Coolmore's Ashford Stud in Versailles, Kentucky. But thankfully that is put on hold for now!

Witness the Excitement of the 2015 Breeders’ Cup® Classic

With this exciting news finally announced, I think we can all agree the 2015 Breeders’ Cup is the place to be this October. Zayat is pointing American Pharoah towards the Breeders’ Cup Classic, and we know you can’t pass up the opportunity to be there. What better place to be than at Keeneland watching the first Triple Crown™ winner in 37 years finish his career?

With an Official Ticket Package direct from Breeders’ Cup through QuintEvents, you can enjoy the Breeders’ Cup Classic from the incredible Trackside Luxury Chalet. Witness the racing action from the second floor, or make your way to the lawn, while enjoying food, beverage and private tellers. We have very limited inventory, which is selling out quickly, so make sure to secure your spot soon!