With the Breeders’ Cup Classic quickly approaching, we’ve decided to reminisce on the incredible past performances at the race since 2005.

The Classic has showcased so much talent over the past years and been host to some of the best moments in horse racing history.

Let’s take a walk down memory lane and look at the performances over the past 10 years! 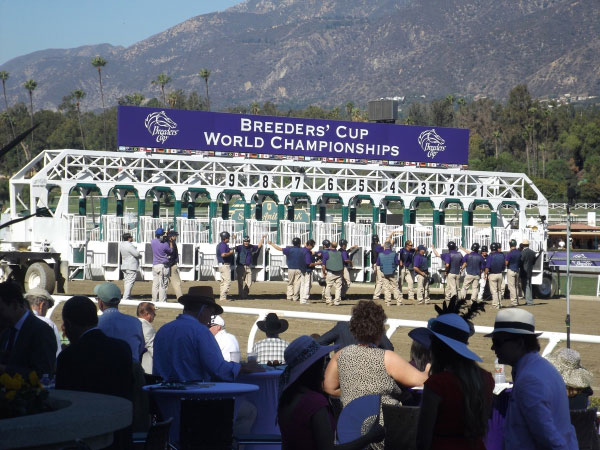 At last year’s Breeders’ Cup Classic, Bayern entered the race at 6/1 odds but was able to beat out favorites Shared Belief and California Chrome. The race started off with horses crashing into each other left and right, and Bayern really had to sweat it out. He maintained the lead of a length or more into the stretch and went on to win the race in 1:59.88.

With a name like Mucho Macho Man, we aren’t surprised this horse won the Breeders’ Cup Classic in 2013. Mucho Macho Man and Will Take Charge were neck and neck throughout the race, but the race ended with a thrilling finish in which Mucho Macho Man won by a nose at the wire! History was also made this day as Trainer Kathy Ritvo became the first woman to win the $5 million championship race.

At the 2012 Breeders’ Cup Classic, Fort Larned traveled along the inside path of the track and led every step of the way, with Mucho Macho Man closely following behind. The two ended up finishing half a length apart with Fort Larned coming out on top!

In the 2011 race, Drosselmeyer proved himself against main contenders Uncle Mo and Game on Dude. From the starting gate, Game on Dude was on track to winning the Classic, but Drosselmeyer kicked it into high gear and won by 1 ½ lengths! Plus, jockey Mike Smith tied Jerry Bailey for all-time Breeders’ Cup victories with 15.

The 2010 Breeders’ Cup Classic was known as The Quest for Perfection. Zenyatta entered the race undefeated and hoped to close out her career 20 for 20 with a second win in the Classic. Unfortunately, Zenyatta did not start well and sat in last place during the first mile. However, she did push herself for one final drive and was able to catch up to first place Blame, but Blame prevailed by a head in one of the most dramatic finishes of all time.

In 2009, horse racing fans were able to witness one of the greatest moments in history at the Breeders’ Cup. Zenyatta entered into the Classic undefeated, faced the world’s best male horses, and showed everyone her incredible talent. In the Classic, she turned for home with a wall of horses in front of her, but jockey Mike Smith was able to move her off the rail into the center of the track. Before the crowd knew it, she shifted into high gear and swept the race by a length over Gio Ponti. Zenyatta was the first female to ever win the Classic!

In 2008, defending champion Curlin was the 9-10 favorite to sweep the Classic, but Raven’s Pass closed down the center of the track to prevail by 1 ¾ lengths over Henrythenavigator in a record time of 1:59.27.  For the first time, the race was conducted on a synthetic surface, which benefited Raven’s Pass, who ran exceptionally well on turf courses.

Preakness Stakes winner Curlin pulled off a mild upset at the 2007 Breeders’ Classic as he entered as a 9-2 fourth choice but went on to win the race. He was no match for the eight other horses as he secured a 4 ½ length victory over Hard Spun. He was later voted Horse of the Year!

Invasor entered the 2006 race as the 7-1 third choice but proved he was the best horse on the field. Bernardini took the lead at the top of the stretch but was already tiring as Invasor closed in to pass the 11-10 favorite. Invasor won by a length in 2:02.18.

In the 2005 Breeders’ Cup Classic, Saint Liam took control of the race in the stretch and won by a length. He was later named Horse of the Year! His jockey, Jerry Bailey, secured his 15th and final Breeders’ Cup win, retiring the following year as the all-time leader in Breeders’ Cup victories.

Now that we’ve walked through the past performances since 2005, let’s talk about this year’s race! With so much talk of American Pharoah running at the Haskell Invitational and hopefully running in the 2015 Breeders’ Cup Classic, we can’t help but get excited.

With an Official Ticket Package direct from Breeders’ Cup through QuintEvents, you can be there to witness the action of the 2015 Breeders’ Cup Classic! Get an unbeatable experience that includes tickets, hospitality, exclusive insider extras and much more. Don’t miss out on this opportunity to head to the heart of the Bluegrass State in October and see some of the best horses compete at the 2015 Breeders’ Cup!