Like the Kentucky Derby, the Breeders’ Cup Championships are never too far away in the minds of horsemen and horseplayers alike. The Breeders’ Cup two-year-old performances are especially fascinating to review this time of year for handicapping the Oaks and Derby as they give important insight into the way a particular horse has developed and matured.

Further, I have often forgotten how good those Breeders’ Cup performances were until I re-live them on video replays. Any two-year-old colt or filly that competed in the Breeders’ Cup had already displayed champion qualities with precociousness, willingness, talent, and soundness during the early rigors of training as “babies.” Often as “new” horses emerge on the Road to the Kentucky Derby or Kentucky Oaks, it becomes easy to focus on dazzling single race victories of the new names maturing this spring over the consistency of several horses who have remained good over time. 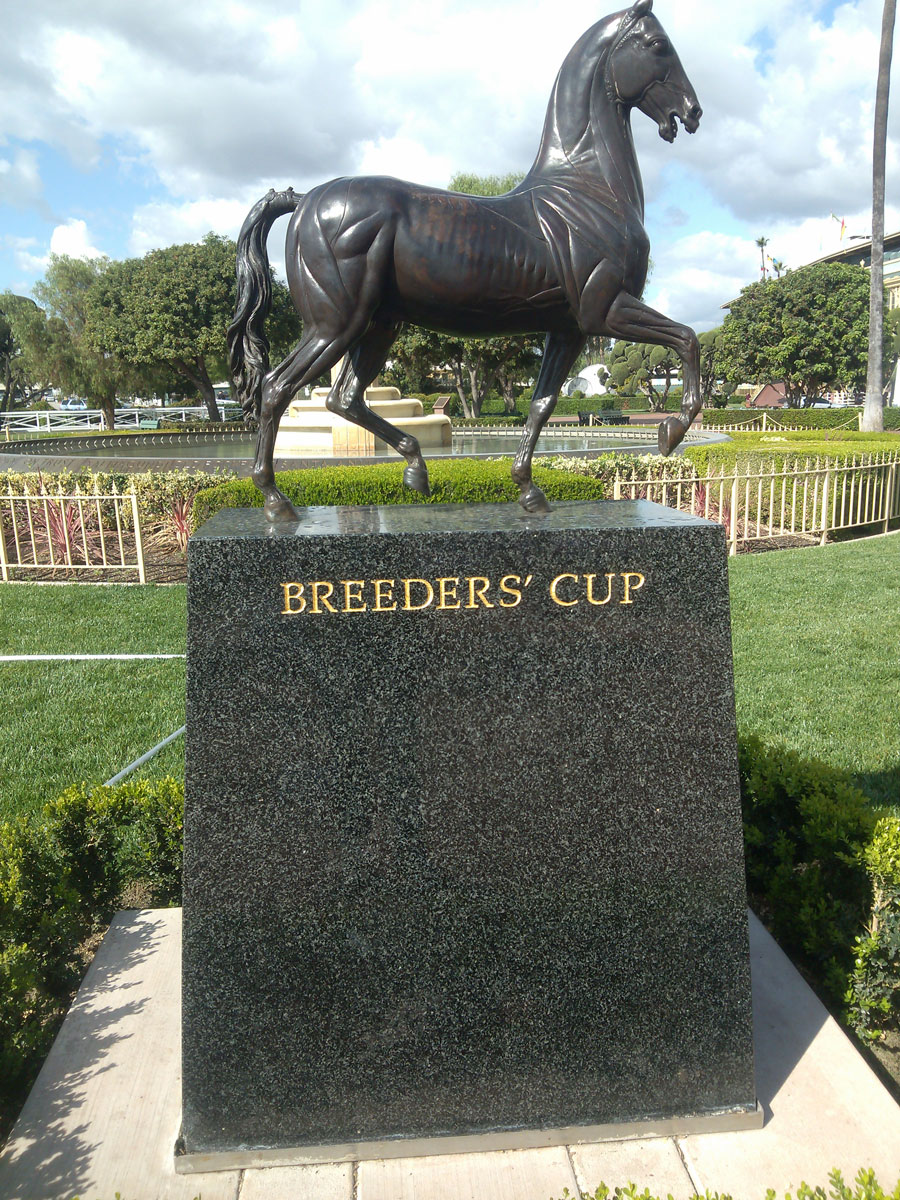 The first change of note when watching the Juvenile races is the most obvious: the physical change. Most of the horses are taller now, and are generally carrying more weight with more muscle mass and definition now as three-year-olds. But even more important than the physical maturity is to note mental changes of some horses in particular.

I saw a lot more anxious horses in the paddock and post parade. There were longer load times in the starting gate and generally more “green” behavior – all to be expected of youngsters. I digress to make a comparison with some of the popular singing competitions. The difference between the same competitors at the audition compared to the finale can be dramatic. For example, Kelly Clarkson showed her talent to sing in the audition at American Idol®, but as she honed her performance skills and style, she was barely recognizable as the same performer when the confetti fell on her winning night.

The most interesting aspect of reviewing the races on video was to observe how some Derby and Oaks contenders have defined their “style” of running. By style, I am referring to whether a horse is a pace-setter or a closer. And further, does this horse now show a pattern in their races leading up to the Oaks and Derby that suggest a predilection and success for that style. The answer is … yes!

Get Info on Attending the 2014 Breeders' Cup

As an example, let’s examine two fillies who will likely command top spots for who I believe will win the Kentucky Oaks when I complete my final selection.

The first filly to scrutinize is Untapable. I have observed this filly even prior to her win in the Pocahontas Stakes at Churchill Downs, her run in the Breeders’ Cup and every major Kentucky Oaks prep race. She just keeps getting better.

Untapable has run her best races when she can be rated just off the pace-setting leaders. This suggests that the filly likes to have a target to run at, but does not like to be behind so many horses that she gets a lot of kick-back from the track in her face. She has good tactical speed so that she can break sharply and find her spot. She then relaxes and sets a pace where she is asked to quicken that pace with each increasing furlong. 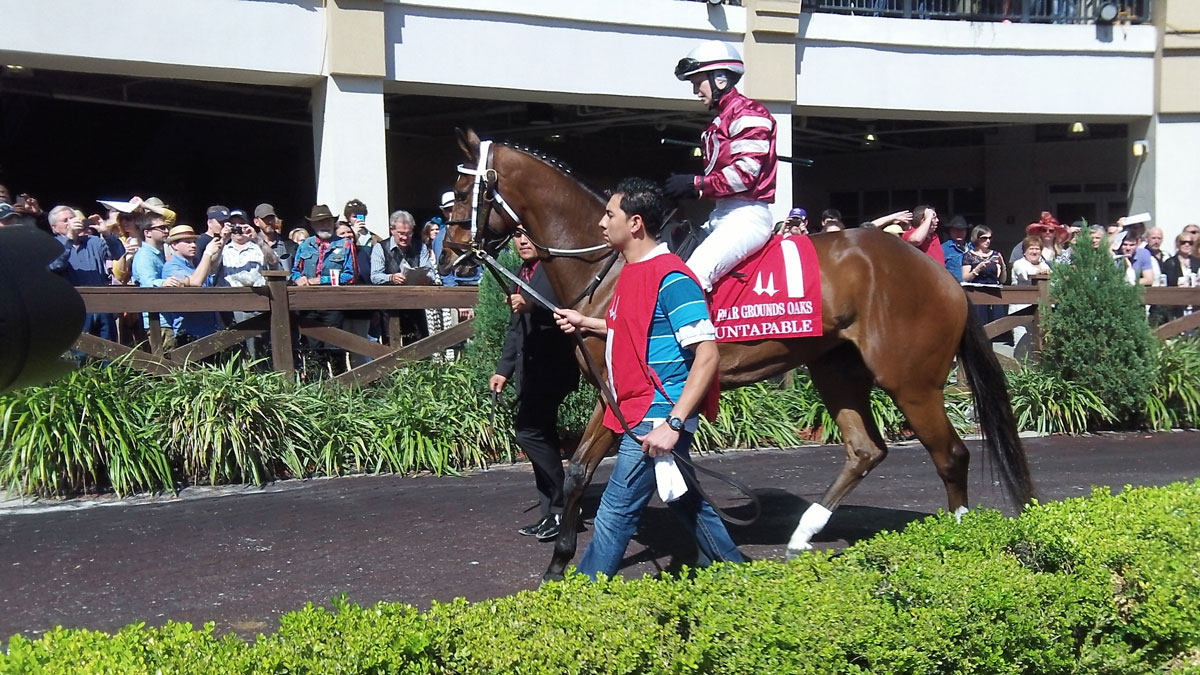 In fact, Untapable’s worst effort occurred in the Breeders’ Cup where she was allowed to rate too far back into the field. Reviewing the race, you could tell that she was uncomfortable and was never able to settle into a cadence that allowed her to conserve energy.

Certainly trainer Steve Asmussen observed the same thing and he made certain to give the jockey instructions to get her closer to the pace in successive races and get her clear of too much track debris. She is undefeated since!

In the paddock, Untapable is flawless and knows exactly what to do – a professional race horse. She is extremely focused, attentive to her handlers and does not waste any energy by getting over-anxious or getting roused by the crowds.

The second filly I studied closely is Rosalind. I was also able to watch this filly develop as a two-year-old from her first days at the track at Churchill Downs. She also competed in the Pocahontas Stakes finishing a game third. But again, I had forgotten how good Rosalind’s race was at the Breeders’ Cup until I watched the race again several times.

The filly actually galloped out in front of the photo finish pair of She’s a Tiger and winner, Ria Antonia. With just a bit more distance or a split second move a bit earlier in the stretch, she would have won the Breeders’ Cup Juvenile Fillies handily! The most telling was to examine still photos of Rosalind with her ears pricked forward as she crossed the wire – clearly believing she won – she just didn’t get the title in ink.

In sharp contract to Untapable, Rosalind does her best running in the final furlong. Rosalind’s closing style allows her to gallop comfortably behind the pack apparently not bothered by kick-back. She can observe changes in the race unfolding in front of her and she gains confidence as she passes rivals. This filly is able to drop into a different gear as she circles the field and then sprints to the wire with an amazing turn of foot.

Rosalind’s style has also become a consistent pattern and her most recent race in the Ashland Stakes at Keeneland was a gutty performance where she came from way off the pace and six wide to hit the wire in a dead heat with Room Service. Trainer Kenny McPeek gave her a bit more time off over the winter to “grow up,” and he has added blinkers to her racing equipment so help her maintain focus in the midst of early traffic. Many will forget that her dirt races are as good as her polytrack effort. The Keeneland win will be the last impression for many who will dismiss her, but I will not!

Additionally, trainer McPeek has scheduled Rosalind’s races so that her third start of the season is the Kentucky Oaks. There is a bit of “magic” in the power of three in racing. The first race back off a lay-off is for fitness. There is just not a better way to get race fit than to race.

In the second race back, the horse is getting back in the groove – like the second shot at the free throw line or the second and third downs in football. Fitness is again honed in the second start. The third start, the horse is now in peak fitness and mentally ready. The old saying “third times a charm” is actually race track jargon and wise old handicappers knew when it was ripe to play their wagers.

Get Info on 2014 Kentucky Oaks

Colts Who Could Be Kentucky Derby Bound

The review of the Breeders’ Cup Juvenile for colts was not as telling since so many of those top-placed colts have been sidelined for injuries or are otherwise not competing.
A couple of horses to note include Medal Count. This colt showed early brilliance and he was in my picks at Breeders’ Cup. He is massive in size and I can only assume that trainer Dale Romans has had to use his best horsemanship and patience as this colt kept growing and adding weight to young bones and joints.

Medal Count showed he has worked through these issues with a stunning performance in the Transylvania Stakes just two weeks ago. He needs points to make the Kentucky Derby, so the Bluegrass Stakes this weekend is telling. 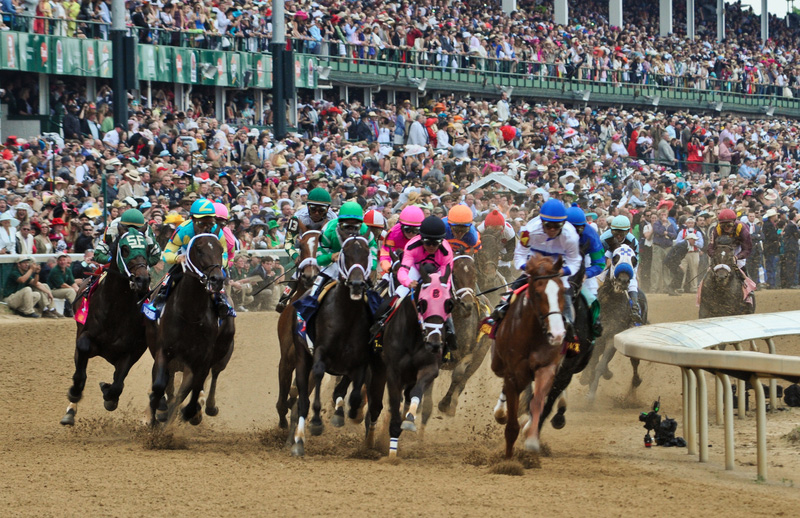 We Miss Artie is another colt that has shown consistency over time. He finished mid-pack in the Breeders’ Cup and in most of his dirt races. He seems to prefer polytrack as his wins have come over that surface at Keeneland and Turfway Park, but he comes to the Derby with his last race as a win and you can never discount the mental points given to a horse and his confidence with a victory.

His races might be “sneaky good” as the pedigree definitely supports the horse being able to go the Kentucky Derby distance. This might be one to keep in your exotics to hit the board.

Get Info on 2014 Kentucky Derby